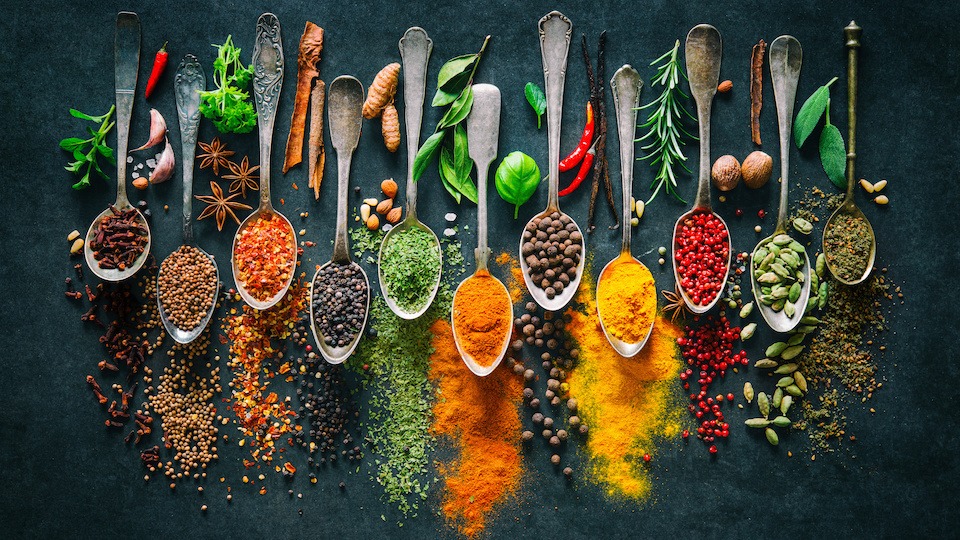 It’s not an accident that the acronym for the Standard American Diet spells S.A.D. There are many “sad” elements of modern western diets: too much sugar, not enough vegetables, too much-processed food, not enough whole foods, too many bad fats, not enough good fats… you’ve heard it all before. But there is one particular “sad” fact about modern diets that doesn’t get anywhere near enough attention…and it may be the saddest fact of all. The typical American diet is terribly bland…and that’s because there are nowhere near enough herbs and spices in our food.

It’s hard to believe that the herbs and spices in those little 4 inch jars you have in your pantry used to be a major driver of the world economy. Spices inspired global exploration, incited war, and were even used as ancient currency. And now, we just let them go bad in the back of the cupboard. It’s time to renovate your spice rack…let my team at UpWellness help you by starting with these 5 anti-inflammatory herbs and spices.

It is silent and invisible, but it can steal valuable years from your life without you even knowing. Chronic inflammation is at the heart of many serious and even fatal conditions, including heart disease, cancer, diabetes, Alzheimer’s disease, and even attention deficit disorder (A.D.D.). Although millions of people suffer from chronic inflammation, numerous things can be done to prevent this from happening to you.

The first thing is to consider your diet. The modern American diet encourages inflammation while a plant-based diet loaded with health-promoting fruits and vegetables is naturally anti-inflammatory. In addition, look to the power of herbs and spices that not only add great flavor to your favorite foods but also contain powerful anti-inflammatory properties. Let’s explore some of the best.

At the top of the list is a spice often referred to as the golden wonder. The powerful anti-inflammatory agent curcumin in turmeric gives the spice its signature golden color. Chinese and Ayurvedic medicines have been using turmeric and curcumin to reduce inflammation, remedy wound, prevent infections, and treat digestive disorders for thousands of years. Studies also show that curcumin behaves like an antioxidant in the body where it may protect against cancer. Add fresh or powdered turmeric liberally to soups, curries, fresh vegetable juices, and rice dishes. Be sure to use plenty of black pepper along with turmeric to help with absorption.

Not only is it a great compliment to a good book, but it also contains powerful medicinal properties. Green tea has been extensively studied for its preventative powers against heart disease, cancer, and more. Recent studies have uncovered the anti-inflammatory capabilities of green tea, particularly when it comes to arthritis.  Research also shows that green tea can reduce inflammation in the digestive tract and may be helpful in treating conditions like ulcerative colitis and Crohn’s disease. Green tea is loaded with polyphenols such as flavonoids and catechins that function as powerful antioxidants in the body and can even fight infection. By reducing the formation of free radicals and protecting cells and molecules from damage, green tea is also thought to be a great drink for those looking to reduce the signs and symptoms of aging.

To reap the benefits of green tea, consume 3-4 cups per day, and choose organic brands.

There are a plethora of chili varieties that all started out as a small shrub called Capisicum annum from tropical regions of the Americas. These hot bites contain a chemical called capsaicin, which not only gives these peppers their fiery taste but also their anti-inflammatory power. All types of chili peppers, including cayenne and jalapeno, contain capsaicin. Use peppers fresh or powdered in many dishes and even desserts. If peppers aren’t your thing, you can also find supplements containing chili peppers along with other inflammation-busting natural ingredients.

You may have used clove oil to help with a toothache or even to help with pain during a dental procedure. This aromatic spice has been shown to reduce mouth and throat inflammation and can be used to help with nausea, act as an expectorant, and battle bad breath and diarrhea. Cloves are also a great all-around inflammation-busting spice. Researchers from the University of Florida found that when participants consumed cloves daily for seven days, they had significantly lowered inflammatory markers. Add powdered or whole dried flower buds to drinks, desserts, and savory dishes for a pop of flavor and to reap the anti-inflammatory benefits.

Ginger is most commonly used to remedy nausea and stomach upset but is also a highly powerful anti-inflammatory that can help reduce arthritis-relateded inflammation. Research has found that this root has a stronger impact than non-steroidal, anti-inflammatory drugs to treat pain and inflammation. A review published in the International Journal of Preventive Medicine found that the protective polyphenols in ginger, such as gingerol (the compound that gives ginger its distinct flavor) and shogaol, prevent the formation of pro-inflammatory cytokines. Use fresh ginger to make delicious tea and powdered ginger in cooking.