Coffee Plus Honey: A Powerful Morning Elixir to Get Your Day Started 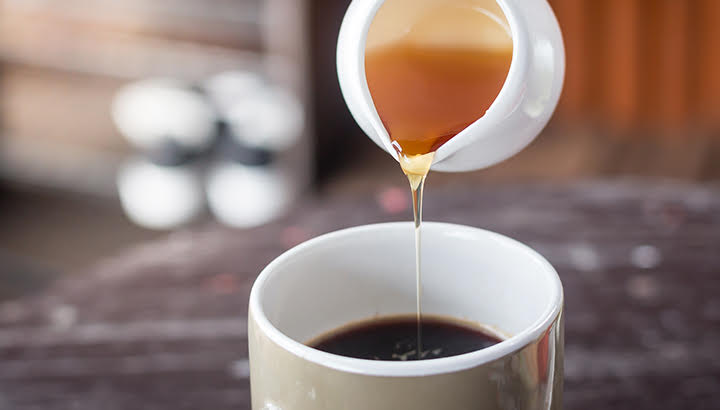 Coffee…it’s everywhere, and people all over the world enjoy the benefits of this versatile beverage. Some like it hot, some like it cold, some like it iced, others blended. No matter which way you like your coffee, the truth is – a little bit every day is quite good for your health. What about coffee additives? Just like anything else – a little of some things can be a great complement to your morning cup of Jo, while any amount of others can sabotage your healthy efforts. Sugar comes to mind!

The best thing, hands down, to put in your morning cup of coffee comes to us courtesy of the bees. Honey, on its own, is a powerful substance capable of great therapeutic benefits. When organic coffee combines with raw, local honey, something amazing happens. The combination brings out the best in both foods and allows you to reap double the benefits of a delicious and nutritious drink. Just one tablespoon is all it takes.

Let’s take a closer look at the benefits of coffee and honey.

In addition to adding local raw honey to your organic coffee, here are a few other healthy additives that will supercharge your morning drink, providing sustained energy all day long.

You don’t need a lot of turmeric, but here’s why you should add it to your morning coffee. Curcumin, the main compound found in turmeric, is widely known and accepted for its antioxidant, antiviral, antifungal, and anti-inflammatory properties. Research from the Journal Cancer Prevention suggests that turmeric consumption in India is high. They consume it fresh, in root form and dried ground form — up to four grams per person, per day.

Research reports that overall cancer rates are significantly lower in India than in Western countries, which is attributed (among other factors) to the high levels of curcumin consumed. The Arthritis Foundation suggests adding 0.5 grams to 1 gram of powdered root three times per day to reduce painful inflammation associated with arthritis. That’s about 0.1 to 0.2 of a teaspoonful.

A pinch of ground back pepper

Cinnamon does more than just flavor your coffee – it is loaded with antioxidants, such as polyphenols. Research, published in the journal Evidence-Based Complementary and Alternative Medicine, reports that cinnamon also possesses the following therapeutic properties:

Add one teaspoon of cinnamon to your coffee to reap the benefits.

Replacing processed coffee creamers with organic coconut oil is a smart move. Although it may sound strange, the result is quite delicious and highly nutritious. The combination of caffeine and saturated fat gives the body a lasting energy boost.

Several studies have confirmed that coconut oil can increase good cholesterol HDL. In other studies, women and men followed a diet containing coconut oil and butter. Researchers found that coconut oil increased energy in study participants and was able to help with weight maintenance or weight loss.

Antioxidants in coconut oil fight free radicals and reduce oxidative stress, both of which count as the main culprits for osteoporosis. Additionally, coconut oil increases calcium absorption. Researchers have found that bone loss due to osteoporosis decreases in patients who take coconut oil regularly.

Prepare a tropical twisted coffee drink by brewing a high-quality organic cup of coffee and place it in a blender. Add in one tablespoon of organic coconut oil, local raw honey, turmeric, cinnamon, and black pepper – blend and enjoy.

Who’s ready for a cup of supercharged coffee?